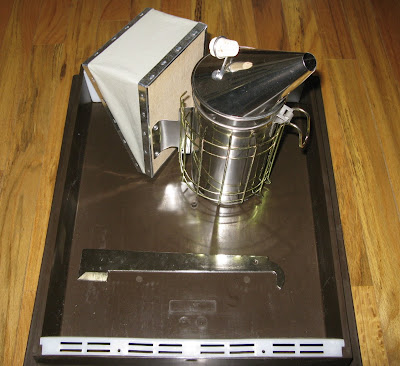 More gear has arrived. In the picture are a smoker and a hive tool sitting in a top feeder. Got these from Brushy Mountain.

The hive tool was discussed earlier.

The smoker is used to burn (pine needles, burlap, special smoker pellets, etc.) to create smoke, which is pumped into the hive via the bellows. The smoke should not be very hot, and the aforementioned items burn on the cooler side. The smoke calms the bees down. In my limited experience, getting the smoker going and keeping it “at smoke," is a bear of a problem (think like the bee, little grasshopper), possibly the most difficult part of beekeeping. It’s always the details, isn’t it?

The top feeder is used to supplement the hive’s food supply in the early spring, before the Niagara of nectar flow, and in the fall, before the dormancy of winter. One pint of water to one pound of sugar is the formula we will be using for spring feeding. This syrup is placed in this tray; the bees get it from the underneath along the sides (without drowning). This lets them concentrate on building wax comb, which is key to the first year of the hive, without having to spend too much energy foraging at this stage.
*
This weekend should be all about the actual hive. We will be collecting the wood on Sunday and putting together some part of it then. My co-conspirator will be revealed… as much as she would like to be revealed.
Posted by Matthew at 4:17 PM